Choose Your Own Adventure: Jenn Ashworth and Richard Hirst on Bus Station Unbound

Bus Station Unbound is an interactive 'choose your own adventure' novel created by Jenn Ashworth and Richard Hirst, set in the Brutalist masterpiece that is Preston Bus Station. The novel is published by Curious Tales, the literary collective which bought us the winter-themed ghost story collections Poor Souls' Light and The Longest Night. Here, they discuss the challenges of bringing their project to life, the freedom of working as a collective, and the strange allure of the bus station. 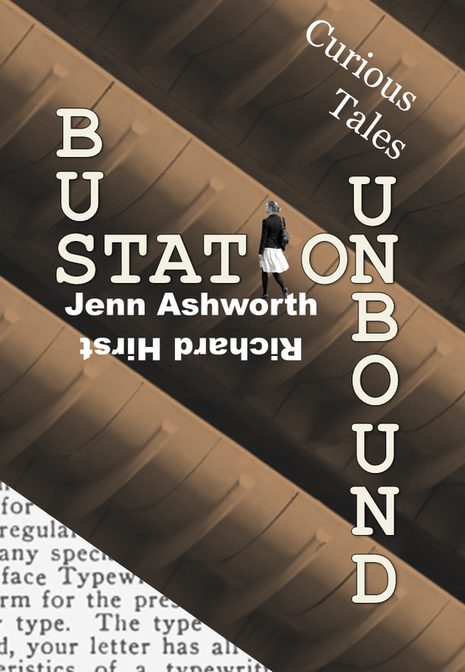 Preston Bus Station provokes strong feelings, positive or negative - what does it mean to you?
The station is contentious amongst Preston folks, with locals forever calling for its wholesale destruction or demanding it be granted heritage listing (something recently achieved). We both have mixed feeling about the place: on the one hand we love it and spent a lot of time there as teenagers. It’s an amazing building, enormous and labyrinthine and filled with enough oddball characters, architectural nooks, grotty crannies, locked doorways, endless corridors and deserted shops to make dorks like us want to set an interactive book in it. At the same time, it’s unwieldy and poorly maintained for its purpose, to the point where it’s actually rather surreal – at nights it can feel like you’re wandering a gargantuan abandoned alien spaceship, then your remember it’s actually only meant to be a bus station.

How did the way you approached writing Bus Station Unbound differ from the way you would approach a traditional novel?
The novel is about 100,000 words long, but no reader will encounter the full text in one sitting. They’re not likely to even encounter most of it. They will most likely experience something the length of long short story or novella. Then, hopefully, they’ll read it again but find everything different and make some different choices and get a different story. And then they’ll do it again; and then again; and so on. When writing the thing, we had to keep this end-result experience in mind, and that any scene we created would change, take on a stronger or lesser significance or disappear entirely depending on the paths our readers choose. Allowing all this to happen whilst keeping the story flowing naturally and the narrative voice consistent and all the other things expected of a piece of fiction is a lot to keep in your head and it gave us persistent anxiety nightmares.

How many different paths through the story can readers find?
It’s very hard to say. Ordinarily as a writer you decide A  will happen, which will lead to B, eventually leading to the denouement that is C. But in this novel, it’s more like A happens which can then lead to B or C, each of which can then take you to F or T but also R and H, and then suddenly you’re back at D and E and then C again, but it’s a slightly altered C, and then that leads you to W and Q and possibly K… and so on. In addition to that, there’s a feature in Inkle, the software we used to write the book, called ‘shuffle text’. This lets us have a sentence which runs, let’s say, ‘It was a dark and stormy night’ in which we can make it so certain words change every time the reader revisits the passage. So the next time they read it, we might make it read ‘It was a cold and stormy night’, and then the next time, ‘It was a snowy and windy night’, and then maybe even ‘It was a cloudy and blustery evening’. There were restrictions on the amount of words or even the length of text we could apply this to, meaning that the novel is packed with great swathes of prose which, on the next reading, will be replaced and not encountered again for the next ten, fifteen, thirty readings. So the number of different permutations the book can take on is, if not exactly infinite, a lot higher than we could count.

What attracted you to the format of choose your own adventures?
I always loved Choose Your Own Adventure books when I was younger – there’s a thrill in learning the main character is YOU, and not only that, you get to decide what happens. But I also remember many of them being rather leaden in how they operate. Often there’s a dilemma such as ‘Do you want to run away? Or do you want to run back into the haunted cave and bravely save your best friend from being eaten by cannibals?’ If you chose to save your friend you’d escape together and ‘win’, naturally. If you ran away you’d be hit by a car and ‘lose’. I often thought it would be interesting to apply the format to a more grown-up novel – one about choice and fate – in which the decisions don’t on the face of it seem quite to carry so much significance, morality is a greyer area, and the notion of there being a way to ‘win’ is much more abstract.

Did you have to learn a lot to be able to bring Bus Station Unbound to life, technically?
We both have an interest in computer games, not just playing them but the way they operate and are perceived. We knew, when we began, that we would be required to come up with the ‘logic’ which would dictate the game. What the reader is told by about the protagonist needs to remain consistent, so is a lot of formulae which either restrict or reveal text depending on what’s gone before: ‘only show this section if the character has been to the bathroom and has bought a chocolate bar but has not been to get a haircut’. It took us a while to get to grips with this way of thinking –it’s fairly second nature for those used to writing games, but for dum-dums like us it was a lesson which was absorbed only with the tearing out of hair and the banging of heads into desks.

Does publishing as a collective give you greater freedom to experiment then you would find with a traditional publishing approach?

The book we published this Christmas, Poor Souls’ Light, was an anthology of ghost stories inspired by Robert Aickman to celebrate his centenary. If we’d opted to do this through a traditional publisher the process would have taken well over a year to finalise, and the chances of a publisher even wanting to back an ornate book celebrating the 100th birthday of a fairly obscure short story writer would have been rather low. Likewise, if we’d approached a mainstream publishing house with the pitch ‘A novel-length choose your own adventure style novel about waiting for a bus’, we would have received only a weary look and a request not to get in contact again. Which is precisely as it should be. Curious Tales is a self-publishing venture: we aren't really interested in replicating or competing with traditional publishing.

As a collective, you are very pro-active about reaching out to readers in different ways - is that something you think will become increasingly important for writers?

Our two previous books, The Longest Night and Poor Souls’ Light – both print-only collections of ghost stories – were only available through us and accompanied by reading tours. There’s something very authentic and very intimate about both selling the books directly to our readers and performing the stories in full to a live audience. That level of engagement is important for us because our readers and our reputation are essentially all we have. That’s why we make our print books high quality objects with lavish artwork from Beth and our e-books elaborate constructs which can be revisited again and again. There’s also a link in each book to a hidden part of our site where you can gain access to whatever extra bits and pieces we can add: recordings of us reading the stories, initial drafts for rejected cover designs. For small publishing outfits like Curious Tales things like this are as important as social media and newsletters.
What are you working on next, both personally, and for the Curious Tales collective?

The next thing will be The Barrow Rapture, an interactive online graphic novel which Jenn has been working on with Curious Tales’ Tom and Beth and Brian Baker, one of our guest authors. We’ve also recently finished our reading tour to promote Poor Souls’ Light, our limited edition collection of Christmas ghost stories, so are beginning to think about what we’ll do for our collection for next Christmas. We intend Bus Station: Unbound to be the first in a series of Unbounds: interactive novels set in real-world locations, so once the Bus Station smoke has cleared we’ll get to work on that.