Review: How To Fight Islamist Terror From the Missionary Position - Tabish Khair 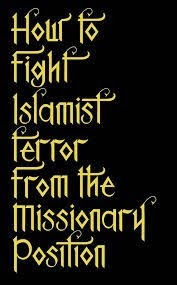 How To Fight Islamist Terror From the Missionary Position is bookended by farcical set-pieces, highlighting the West’s curious mixture of paranoia and complacency when it comes to the perceived threat of religious extremism. At the outset, the narrator is sitting in his car trying to muster up the enthusiasm to provide a semen sample, when he is alarmed to see a police patrol car pulling up, alerted by the suspicious presence of a ‘more or less Muslim-skinned man’ in a parked vehicle. Later, a Somali man stages an attack on the house of ‘one of the Danish artists who had drawn the controversial Mohammed cartoons a few years back’. Although he is seen sharpening an axe, in broad daylight in a local park, he is able to reach and gain entry to the cartoonist’s house, at which point his intended victim retreats to a specially reinforced bathroom, where he eats a sandwich while awaiting rescue; his grandchildren watch television in another room, oblivious, as the man tries to break down the toilet door with the axe. Eventually, the police arrive, and the attacker is ‘easily overpowered and arrested’. In between times, Khair attempts to satirise the experience of living as an Asian man in the Scandinavian heartland of Western liberal attitudes.

At the heart of the story is the relationship between three men – the unnamed narrator (an academic, born to a Muslim family in Pakistan, but atheist by vocation), his close friend Ravi (a wealthy, Indian-born irreligious Hindu, with movie star looks, working fitfully on his PhD thesis) and Karim, their landlord (a devout Muslim from India). The pair move in with Karim after the narrator’s wife throws him out, an indirect result of the semen sample incident. Although there is a difference in attitudes between landlord and tenants, they swiftly arrive at an accommodation; Karim permits drinking if it is confined to their bedrooms, where Ravi installs an expensive bar, and Ravi begins to attend the Quran study sessions his landlord organises each Friday in the living room. There is a degree of tension between the narrator and Karim, due to the latter’s rather conservative interpretations of scripture, but this is largely diffused by Ravi’s curiosity. Bickering about religion is of secondary importance to the pair, behind the vagaries of the local dating scene, where they search for women who don’t ‘date only white men or only coloured men’.

Rather than relying on shock tactics, as its name suggests, How To Fight Terror… is really a novel about appearances and first impressions. Ravi, in particular, is well aware of the importance of looks. He and the narrator are conscious that, although they are both broadly secular in outlook, and were educated by Christians, they are generally seen as ‘Muslim-skinned’, and are clearly ‘other’ in most social situations (‘any two South Asians in any bar in Arhus could not be too difficult to locate’). A frequent traveller, he grows a beard to test the theory that it will delay him in customs (it does, slightly), but he is also willing to exploit his perceived ‘exoticism’. Trying to set the narrator up with a fellow academic he dubs ‘Ms Linen Marx’, he drip-feeds her stories about his friend’s religious background. He knows that the narrator will deny them, but convinces Ms Marx that this is because he is ‘too embarrassed or afraid to acknowledge [his] incipient provincial fundamentalism in these, ah, cosmopolitan circles’. The pair are just as guilty as anyone else of making snap judgements - on one of their first double dates, they organise an elaborate escape plan after one of the girls makes an innocuous comment about the anti-immigration policies of the Danish People's Party.

While Denmark is often seen as a paragon of social democracy, it too comes in for its share of criticism. Behind the liberal veneer, Ravi sees hypocrisy (‘this is not a bloody Third World state; it is a civilised country. You think anybody would give you real reasons in a civilised place?’) and an urge towards conformity (‘I was surprised by how many traditions structured, sometimes rigidly, the lifestyle of the Danish middle classes’). When an acquaintance’s marriage breaks up, he is initially pilloried by his children for his infidelity, until it emerges that his affair was with another man. To the Danish mindset, this assertion of the ‘true self’ trumps any obligation towards family, and must be celebrated. Not that India and Pakistan are romanticised – Ravi is equally critical of ‘the whole blind bickering gang of them for their fuck-ups in 1947’, and the ‘bread-and-butter tongue’ employed by the middle classes and exemplified by authors like Rushdie and Naipaul.

Throughout the text, the narrator drops hints of a dark event that the story is building up to, and this knowledge casts a shadow of suspicion over Karim’s behaviour. There is little direct discussion of the politics of Islam (although the Arab Spring plays out in the background), but the flatmates’ conversations highlight differences of culture and interpretation – often ending with Karim blushing furiously as a result of the younger men’s relaxed attitudes towards sexuality. The landlord seems benign, but the tenants are occasionally troubled by his mysterious absences, and by a series of strange phonecalls to the flat. Is his Quran study group a cover for something more serious, and if so, what can they do to stop it?

This is where the novel is less successful; the playful, bickering relationship between the narrator and Ravi gives How To Fight… its energy (‘Bastard was a term of affection between us’), but elsewhere the writing can be creaky. One suspects that Khair is aware of this, as he frequently drops in reminders that ‘I’m not writing a novel. This is an account of events that you have read about,’ and makes self-deprecating references the ‘rules of writing’ as laid out by his ‘MFA girlfriend’. He struggles to build up the sense of impending danger, relying too much on constructions like ‘my current state of knowledge’, ‘what was to come later’, ‘looking back and recalling the conversation I should have suspected’, and so on. Later, he interpolates a short story written by Ravi into the text, which doesn’t read like the work of the hotly-tipped author the character is supposed to be, and a long description of a dream which sucks life from the novel.

When the denouement finally arrives, Khair finds his way again, writing with ironic understatement (hearing a report on the news, Ravi tells the narrator ‘your bretheren have been bothering the blondes again’), and presenting his characters with an interesting moral dilemma. Ultimately, there is little in this novel to shock, other than the title, but I wouldn’t go as far as to call it a sheep in wolf’s clothing. The three-way relationship between Karim, Ravi and the narrator has an engaging dynamic, and Khair writes dialogue very well. There’s value too in his assessment of ‘the impossibility of conversation’ in a culture dominated by ‘the Niagra of suspicion and prejudice and brashness cascading all around us’. A short and relatively light book, How To Fight Islamist Terror From The Missionary Position at least shows that cultural responses to the Great Big War on Terror needn’t be worthy or humourless.
Unknown at 21:34
Share