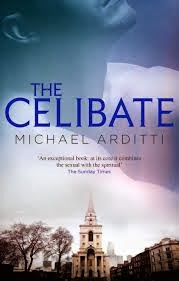 The press release for this 20th anniversary reprint states ‘The Celibate is the story of a young, unnamed ordinand with his mind full of God and his heart closed to love.’ I’m not sure I agree with this if I’m honest. OK, the ordinand is young. He’s also unnamed - this is always a really helpful authorial device from a reviewer’s point of view. I intend to call him ‘O’, for the sake of readability. Is his mind full of God though? I’m tempted to say not. He’s full of religiosity, but that’s not really the same thing is it?

The greater part of the narrative is O’s contributions in his sessions with his psychiatrist. We never hear the psychiatrist speak and have to deduce his contributions from O’s responses. These one-sided conversations are broken up with segments of two tour guide commentaries which underline some of the themes arising in O’s story, of which more later.

O has had an emotional meltdown during his training for the priesthood and has been sent to London to live in a religious house and ‘volunteer’ at a church based drop-in centre for the homeless and vulnerable. He’s in denial; he’s defensive; he’s isolated; he’s judgmental; he’s clinging to his rigid interpretation of Christianity with all his might as it’s the only identity that he wants to claim. He gives us the impression of having no real self, not even a sexuality, just a set of learned behaviours which he regards as appropriate to his vocation. However, there are glimmers of the sexuality he denies in his close friendship with a fellow ordinand who he claims betrayed their friendship by falling in love with him. In reality, it’s not that religious oppression has thwarted his sexual development; he’s an Anglo-catholic so celibacy is a free choice rather than an imposed condition. Instead O has partially chosen the church as a career because he hopes his celibacy will be respected rather than seen as a deficiency.

We see from very early on that he’s an unreliable narrator, at first refusing to give credence to his superiors’ version of the event that led to his need for treatment, then passing it off as a physical affliction only, before grudgingly accepting the term ‘breakdown’. From his own account we can see that he’s unable to relate to his co-workers. He’s also very uncomfortable about his background and childhood. He comes from a very wealthy family with an ill mother and an absent father and was largely raised by an aunt who wanted him to be wholly Jewish despite his Christian mother. The unfolding of what exactly did happen in his family takes some time to discover as there are some things he wants to conceal and other things he has blocked out of his memory. He recalls his uncle turning to vagrancy and one night follows a man he thinks might be him. This leads to him getting involved with a group of rent boys who repulse and fascinate him in equal measure.

The author has decided that before O can bounce back that he has to hit rock bottom. This is achieved by embarking on a viciously self-destructive relationship with a professional sadist which makes very disturbing reading and ends with a suicide attempt. After this he does begin to rebuild his life.

The tour guide commentary in the first part of the novel is from a Jack the Ripper tour which talks at length about prostitution, poverty and pornography. As well providing useful relief from the monologue style narrative of the therapy sessions, these passages encourage us to reflect on the lives of those people who are beneath the notice of ‘decent’ people and O’s very negative old-school attitude that sexuality is a gateway to sin and death.

In the second half of the novel O becomes politically aware and gains a sense of community from taking part in Pride marches and campaigning against Section 28. He finds himself a boyfriend and becomes involved with his circle of friends. When HIV and AIDS begin to affect the people he knows, he needs to grow still further in order to cope with the suffering and loss. The commentary in the second half is from a tour of the village of Eyam in Derbyshire. When the plague came to the village they elected to isolate themselves so that it didn’t spread around the district. These sections emphasise how a community can support each other through suffering and give hope that after some difficulty they can be accepted back into the world at large.

This is a good novel. It’s thoughtful and philosophical and the character of O is very well drawn. It’s a novel which challenges the reader, as it’s not often you find abusive urolagnia and serious theological reasoning in the same book. It also conveys the late 1980s very well. Does this mean it’s dated now? After all, our society has moved on a great deal in terms of LGBT rights and recognition. Therapies for HIV have improved. There are places where the novel is fighting for things that have now come to pass. However, I think the book is still timely in a way because it highlights a very current issue with tensions between gay rights activists and the more traditional Christian churches. According to some activists, to be a Christian is to be a homophobe and religion justifies acts of hatred towards LGBT people, and yet many Christians are LGBT, having struck a balance between the teachings of their church and their sexual identity. This book demonstrates convincingly how that can be managed by opening up the discussion of weighing traditional church law against the conscience of the individual; questioning the degree to which God experienced human love and affection through the person of Christ; and accepting that the instincts to cherish and care for those we feel close to are part of how we’re made.